Katie, the Product Owner of our Direct Sales Team, teared up as she described what she had heard.

Earlier that day, Katie and her mom listened to a podcast about the life and times of Kayla Green. Kayla shared her story of softball and survival.

The Next Season is a brand ambassador program designed to give softball players a signature apparel deal and lessons on how to increase their business opportunities when they are done playing in college. The original idea for The Next Season was simple. Discover which players inspired our softball community and co-create some really great products with those athletes. Our goal is to close the opportunity gap for softball players. Surprisingly, something unexpected happened.

We were not planning on being inspired. But it happened anyway.

She wasn’t on our radar before, but she is now.

Thank you Kayla for the impact you are having on the softball community. Thank you Kayla’s network for taking the time to vote and vote and vote some more. It may not have been your intent, but you inspired us all.  It's crazy to think how much Kayla can motivate and inspire strangers, just by doing what she loves in the sport of softball.

We hope the moral of this story is clear. If there is a softball player that you think deserves a chance to have a signature shoe and apparel deal, tell us her story. You can vote. You can inspire us too.

To vote for your favorite player and tell us her story click here.

We’re not sure who will be the 5 athletes who participate in the Next Season because of commitments, conflicts, life, and all the other things that are a part of this business. But we are sure that we will all be inspired by telling stories like Kayla’s.

How far reaching can your impact be? Katie’s parents watched their first collegiate softball game the other day. Let me say that one more time.  Katie's parents watched their first college softball game ever the other day.  They saw Arkansas beat LSU 1-0. Kayla worked a walk in the top half of the 7th inning that ended up being the winning run. Go Hogs! 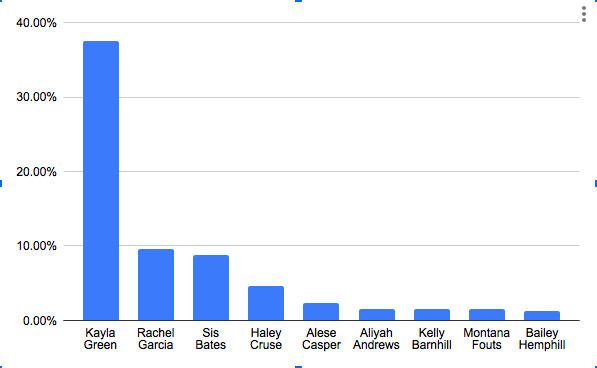 Voting for the next season will run until May 31st.

Vote for your favorite player.

Tell us her story.

Players eligible to receive a signature shoe and apparel deal must have played their last collegiate game prior to being signed by a brand. We will be selecting players who have completed their college careers in the following years: 2019, 2020, or 2021. Per the NCAA: NCAA rules forbid student-athletes to agree, orally or in writing, to be represented by an agent or organization in the marketing of his or her athletic ability or reputation until after the completion of the last intercollegiate contest, including postseason games.